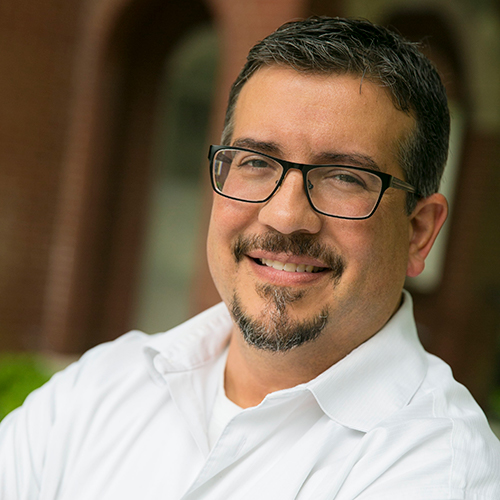 Chris Gonzalez earned a PHD in family social science and joined the faculty at Lipscomb University in Nashville as a professor of psychology. Chris says his experience in CEHD’s Family Social Science department was the launch-pad for every single one of his professional accomplishments. Chris soon made an impact at Lipscomb by leading the development of a new master’s degree in marriage and family therapy. He also founded the Lipscomb Family Therapy Center, a mental health clinic open to the public. Chris is an active volunteer in his community, and has led several international service trips. He has established a partnership with a children’s rescue organization in Ghana called Touch a Life, and involves his students in analyzing their program data.

Please list any professional accomplishments you wish to mention.

What professor(s) or course(s) were most influential during your time in CEHD?

What was the impact and benefit of your educational experience in CEHD?

My experience in the Department of FSOS in the CEHD has been the launchpad for every single professional accomplishment since graduating in 2010. The training I was able to engage while doing doctoral work laid the groundwork for me to excel professionally and to become a valuable colleague at Lipscomb University as well as make meaningful contributions to the National Council on Family Relations as well as the American Association of Marriage and Family Therapy. I gained tremendous skills, developed significant confidence in my abilities, and gained a community of scholars (and friends) from the relationships that formed with classmates and professors. They are all with me wherever I go. I carry these treasures with me all the time.

What is your favorite memory from the University of Minnesota?

One morning I was running late (as usual) to a research meeting for Dr. William Doherty's Family Formation Project. As I raced up the south stairwell of McNeal Hall, huffing and puffing, trying to imagine some plausible excuse for my tardiness, I had an unforgettable experience. In that anxious and hurried moment, I felt an unexpected sensation and had an extremely intense feeling and thought, which was this: "The purpose of your life is to heal and to heal." What I understood this message to mean was that I was to go about my life continually healing my own wounds while I participate in the lives of other people helping them heal their wounds. Never before and never since have I had such a message. It was so intense and impactful that now 10 years since that moment, I have not forgotten it. That message drives my work every day. It has shaped my leadership in the MFT program I direct, my teaching, my therapy, my supervision, my faith, and my life in general.

Who has inspired you the most during your career?

I want to say this is an unfair question. So many are so inspiring. Of all of the inspiring people I have had the privilege to be with, learn from, and gained valuable mentoring from, the words of Hal Grotevant have come back to me time and time again.

What skills are important to succeed as an emerging professional today?

What are your hobbies?

How do others describe you?

Someone who is passionate about his work and loves his family, but does not take himself too seriously. Good sense of humor, kind, and compassionate. Works hard, but can nap like a boss (ok, that last part is how my wife describes me).

How do you describe yourself?

I am a person who is trying to become the most fully alive version of himself trusting that doing so is my very best contribution to this world.

What's a good book you'd recommend to others?

The Family Crucible by Gus Napier and Carl Whitaker. It is the reason I am a Marriage and Family Therapist.

If you could have coffee with anyone from history, who would it be?

What gets you excited about work?

When I get to create.

When you were a kid, what did you want to be when you grew up?

Outside of your job, how do you grow professionally?

I practice therapy and supervise. I listen to books on audible and salient podcasts with an effort to expand the scope of topics in which I can be conversant. I do my best to keep current with pop culture as a way to know my students. My hope is that I can make meaningful contributions inside my field while being able to make meaningful contributions outside my field.

What is a "fun fact" about you?

Just after I graduated with an undergrad degree in English Education, but before I had a full time job, I lived with a few other guys in Houston, Texas. One of my housemates, Brian, was a youth minister at a local church. He got invited to lead a youth event in Fryeberg, Maine. He invited me to go with him since I had nothing better to do (which was true). We both flew to Maine and I assisted him with the event. When the event was over, Brian suggested rather than fly back to Houston, we purchase one the old cars for sale on the side of the road. He would not let me say no. We purchased a 1965 Rambler American for $350. It got 20 miles to the gallon of gas and 50 miles per quart of oil. White and blue smoke billowed from the Rambler. We drove through Boston, DC, NYC, Philadelphia, Nashville, Little Rock, Texarkana, and made it all the way back to Houston. Upon arriving in Houston, the car never started again. Brian sold the car a week later for $400.