Listening to the Voices of East African Girls

The initial phase of our research began shortly after the release of the 2007 Tucker Center for Research on Girls & Women Research Report, Developing Physically Active Girls. The report indicated that diverse populations of girls were the least active of all youth, and little was known about the physical activity behaviors of racial-ethnic sub-populations of girls, such as East African girls. The report also called for more research from girls’ own perspectives to reverse the trend of physical inactivity disparity.

Nicole M. LaVoi, Ph.D. and Chelsey Thul, Ph.D. received a grant from the Melpomene Institute for Women’s Health Research aimed to begin to fill this research gap. Thul and LaVoi interviewed 19 Somali and Ethiopian young women, all of whom were physically active and practicing Muslims in the Twin Cities about their experiences with physical activity.

Check out the research poster.

Based on the girls’ desire to be physically active, in 2008 Fatimah Hussein, a Somali-American Muslim woman, along with Thul’s involvement as a participant-volunteer research consultant, established the Girls’ Initiative in Recreation and Leisurely Sports (G.I.R.L.S.) Program, a female-only culturally appropriate physical activity program. The program takes place for a few hours twice a week and is held in the Brian Coyle Community Center gym—located in the heart of the Cedar Riverside neighborhood in Minneapolis, MN. Today there are 40+ girls who attend the program, most of whom are East African and range in age from 10-22 years old.

Founded as a way to provide culturally appropriate physical activity for Muslim/East African girls, the program provides strength-focused, youth-engaged, holistic, and positive youth development opportunities that are tailored to the specific interests and needs of the girls. In 2015, the program was registered as a 501 (c)(3) as GirlsWin.

The program has developed into a joint effort supported by several community organizations, including the Somali American Youth Enrichment Club (SAYEC) the Tucker Center for Research on Girls & Women in Sport at the University of Minnesota, Cedar Riverside Community School, Brian Coyle Community Center and University of Minnesota Medical Center-Fairview. For more information check out the GirlsWin website!

In 2010, Salma Hussein was a senior undergraduate student at the University of Minnesota during which she earned a McNair Scholarship given to first generation undergraduate students to prepare them for graduate work. Hussein conducted a study entitled “Programmatic evaluation and interest of Somali adolescent girls and women” under the guidance of Chelsey Thul and Nicole M. LaVoi, Ph.D. The purpose of this study was to evaluate the G.I.R.L.S. Program (formerly the Confederation of Somali Community in Minnesota’s all-female basketball program), as well as explore future programming opportunities. Hussein went on to complete her Master’s in social work and currently works as the coordinator of community-based programs at the University of Minnesota’s Multicultural Center for Academic Excellence. She continues to work closely with the G.I.R.L.S. program. 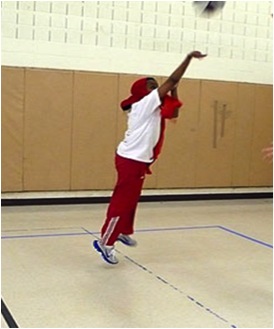 As a volunteer research consultant to the G.I.R.L.S. program over many years, Thul heard from girls themselves as well as the coaches of the program that they wanted and needed more space to increase their individual, as programmatic opportunities for, physical activity. However, it appeared spaces in the community were contested terrain wherein real and symbolic boundaries limited participation.

In 2012, Thul embarked on her doctoral dissertation to explore the contested terrain. The purpose of her research was two-fold: 1) to explore Somali adolescent girls’ experiences with, and perceptions of, the intersection of gender, race, ethnicity, class, religion and culture in physical activity spaces, and 2) to understand the implications for locating and implementing future culturally relevant physical activity programming. Thul conducted a participatory mapping activity and focus groups with the girls. Her research also included aspects of a feminist participatory action research (FPAR) design that included G.I.R.L.S. leaders at the time, Fatimah Hussein and Salma Hussein, and the adolescent girls, all of whom were directly involved in most stages of the research. Participants included 30 Somali adolescent girls ages 14-22 years old, all of who were physically active and practicing Muslims. Based on the data collected throughout this line of research, the girls’ primary suggestion to combat spatial inequalities was to provide more physical activity opportunities in private, female-only spaces mostly within but occasionally outside of the community. Thul continues to collaborate with the girls, G.I.R.L.S. Program leaders and partners, as well as a variety of academic and community partners to provide physical activity opportunities that meet the interests of the girls, while also upholding their cultural and religious beliefs. 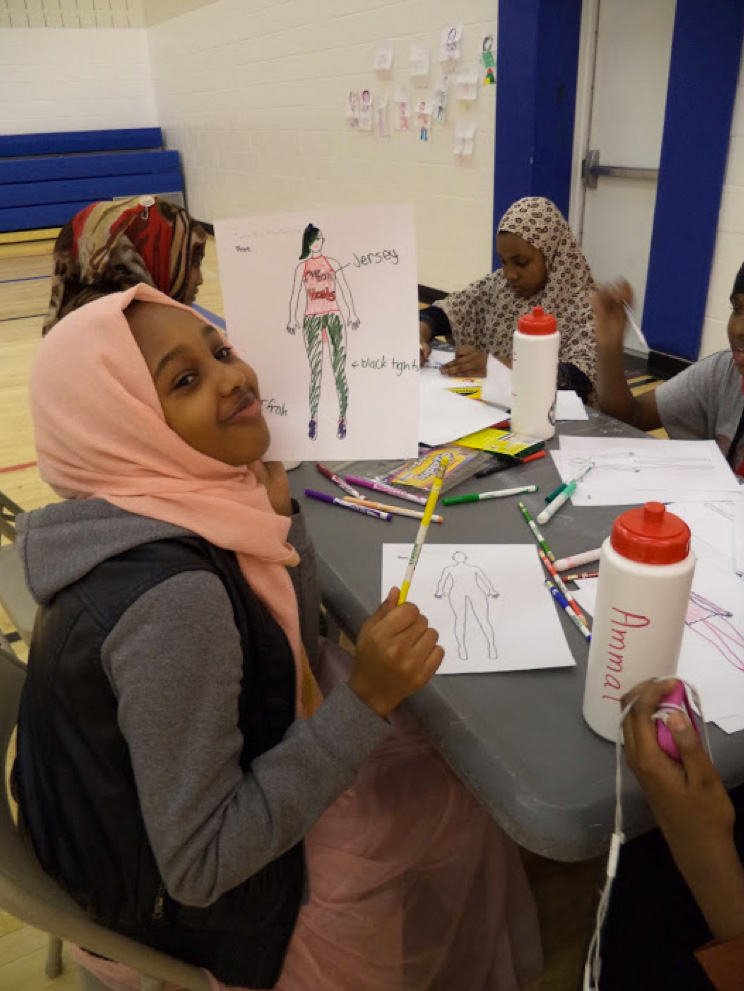 In all our previous research, one of the most commonly discussed barriers to East African adolescent girls’ physical activity participation was the clothing the girls wore to stay covered so they could uphold cultural and religious values of privacy and modesty. The girls wanted to be covered, but they also wanted to feel comfortable being active, and there are few culturally appropriate athletic-wear options on the market with none geared toward adolescents. Thul built an interdisciplinary, community-University team, including Dr. Elizabeth Bye, Ph.D., Professor and Department Head of the Apparel Design Program, Dr. LaVoi, Fatimah Hussein, and the G.I.R.L.S. participants, coaches (Jennifer Weber and Muna Mohamed), and community partners, to address this barrier.

In 2013, the team of community members and scholars earned a two-year grant from the Minnesota Agricultural Experiment Station (MAES) State Reserve Funds entitled “The Impact of Culturally Sensitive Apparel Co-Design on the Physical Activity of East African Adolescent Girls,” or simply, the Co-Design Project. The primary goal of the project is to co-design a garment for physical activity that is functional, culturally sensitive, and aesthetically appealing to East African adolescent girls.

Specifically, the goals of the project were three-fold:

A key component of the Co-Design Project, which is consistent with Thul’s previous work, includes listening to both the girls’ and the community’s voices through collaboration and feedback. The Co-Design project includes three key components: 1) survey development, 2) the process of designing the athletic garment and 3) production of the garment. The first step in the Co-Design entailed developing a survey that would be administered prior to the clothing design process and again after the girls received their outfits in order to address goals 2 and 3 of the project. The second step took place during the Fall of 2013 and the Spring of 2014. On Wednesday nights, the G.I.R.L.S. program participants worked alongside College of Design students to develop a design for athletic apparel that was both culturally and religiously appropriate as well as functional. Throughout this step in the research process two major community-wide feedback sessions were held in order to gain feedback from both the parents of the participating girls as well as other community members, including the girls’ peers. The leadership team knew the garment would only be successful if the girls had parental and community support, making feedback essential. The third step in the Co-Design is the production of the athletic garments. While the participating girls designed the garments, skilled community members are sewing them in order to engage elders and the wider community to enhance social support of the clothing and the girls’ participation in physical activity. The culmination of the project will come in June 2015 with a fashion show put on by the girls in order to display their hard work.

Throughout the two-year project, there has been a concerted effort to keep the girls engaged by organizing field trips and giving them new (sport) experiences whenever possible. The participants have gone to a Gopher Women’s Basketball game, toured the College of Design, tried gymnastics at a nearby high school and played tennis at the Fred Wells Tennis & Education Center. Each of these trips included the girls taking time to observe the clothing required for each sport and examining what about the outfit did and did not worked for their own clothing needs. The field trips, along with the survey and the clothing designing process, aimed to involve the girls as active and key members of the research process. 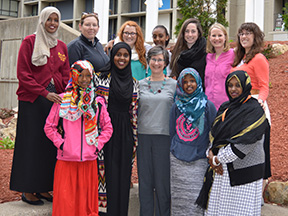