Spring Greetings from the Tucker Team! Before I celebrate the coming of spring and bring you up to speed on our current undertakings, I want to highlight a few important past happenings.

Last fall was very busy as the TC celebrated its 25th anniversary of making a difference in the lives of girls and women in sport. This newsletter features some of our key accomplishments honoring our tradition in research, education and outreach, including a new documentary with tptMN and a new research report on physically active girls.

As the snow flew this winter (as it did a lot here in MN!), I was busy in my new role as director of the Tucker Center (TC). Taking over the helm of the TC from Dr. Mary Jo Kane, founder and director emerita, is an honor, privilege, and great responsibility. I have enjoyed learning from and working with her for the past 14 years, and as she enters phased retirement, her research acumen and political savvy will be missed. Dr. Kane will officially retire at the end of 2019.

Currently the Tucker Team is planning and preparing to host the 6th annual Women Coaches Symposium on April 19. You'll read about our program "Self Care for Coaches" and can nominate a Coach of the Year, an award sponsored by Jostens.

As is typical, the Tucker Team and TC affiliated scholars have been very productive, you can read about their impactful work regarding girls and women in sport and physical activity. In "Kudos and Announcements" and in our "Staff Update" that features MS student Mikinzee Salo. You can also read up on the latest trends and thought-provoking data from our Women in College Coaching Report Cards.

Each year we produce a number of Women in College Coaching Report Cards (WCCRC) in collaboration with WeCOACH. The reports document the percentage of women in head coaching positions at institutions, conferences and in sports over the last seven years at NCAA D-I, D-II, and D-III levels. The data is beginning to show some interesting trends.

To read all the WCCRCs, download the infographic, discover how the report is making a difference, and learn about more interesting trends and the +1 Challenge. To see which institutions, sports and conferences receive passing and failing grades, visit our website: http://www.TuckerCenter.org

With one month to go, the 2019 Women Coaches Symposium (WCS) with the theme of "Self Care for Coaches" is shaping up to be another sell-out! The 6th annual WCS will take place on Friday, April 19, at TCF Bank Stadium on the U of M campus. The WCS provides educational programming, networking, and professional development for hundreds of women coaches, administrators, and students of all sports and all levels. In the program this year, aspects of well-being will be addressed by expert speakers from around the world, including emotional, spiritual, social, and occupational well-being.

Financial well-being is presented by our GOLD sponsor Morgan Stanley.

NEW this year are Coach of the Year Awards, sponsored by Jostens. In the six years we have hosted the WCS we have encountered amazing women. We know of many exemplary women coaches at all levels of sport who are committed to "doing it right" and we want to honor them. We have developed an award with criteria that honors these women. We are taking nominations for two categories (College, and Youth/High School/Club) through Monday, April 1. To nominate a coach, please fill out this short form.

The WCS is hosted by The Tucker Center for Research on Girls & Women in Sport, WeCOACH, and Gopher Athletics.

Mikinzee Salo joined the Tucker Team as a Kinesiology MS student in 2017. She did her undergraduate work at St. Catherine University in St. Paul, MN, where she majored in psychology while competing on the women's tennis team. Since graduating with her bachelor's degree in 2016, Salo has served as the Assistant Women's Tennis Coach at St. Kate's and a supervisor for Tennis and Life Camps (TLC) at Gustavus Adolphus College in St. Peter, MN, during the summers. With a passion for tennis and for advocating for girls and women in sport, Salo recently accepted a full-time position as the Assistant Director of Tennis at TLC which she will begin after graduating with her MS degree this spring. Tennis and Life Camps is a non-profit summer camp dedicated to developing tennis players, of all ages and abilities, and improving their tennis skills and an enriched approach to life. TLC uses tennis as a vehicle to teach campers about life and how to handle successes and difficulties both on and off the court. In her new position, Salo will be responsible for the development of the tennis curriculum and scholarship program, staff training and retention, and educating staff about diversity and inclusion. 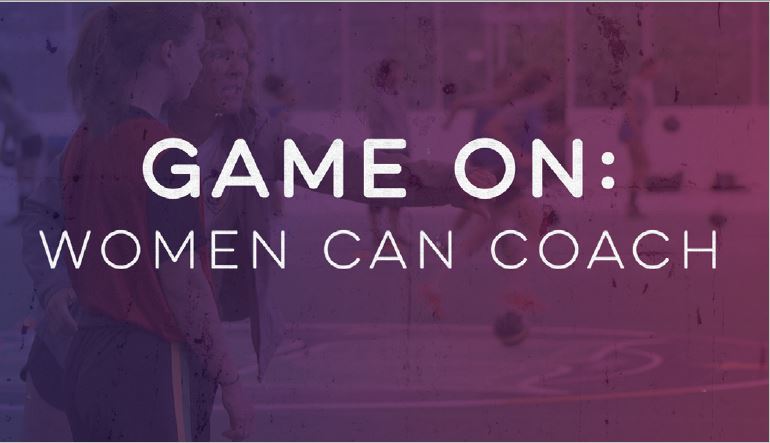 Watch Game ON: Women Can Coach, our third documentary produced with tptMN. This film explores supporting research, dispels false narratives, and celebrates female coaching pioneers at all levels of sport. Many educators and coaches are using it to inspire NextGen coaches to get in the game.

In February, the Tucker Center received the 2019 Minnesota Legacy Award at the 33rd Annual Minnesota Girls and Women in Sports Day presented by the Minnesota Coalition of Women in Athletic Leadership for our work to make a difference in the lives of girls and women in sport over the last 25 years.

Anna C. Baeth, Kinesiology doctoral student in the sport sociology emphasis in the School of Kinesiology and research assistant in the Tucker Center, has been awarded a grant from the National Collegiate Athletic Association (NCAA) for her proposal, "Analyzing the Pathways of Women Head Coaches with a 20+ Year Career Longevity in NCAA D-I Sport." Baeth's research focuses on women who have stayed in D‑I coaching for over 20 consecutive years and centers on supports—rather than barriers—that women coaches experience. Baeth writes that "findings from this study will have significant implications for awareness, coach recruitment and retention, and increasing diversity in the coaching profession."

Mary Jo Kane, Ph.D., TC director emerita, gave a keynote address on February 1 at the 22nd Annual TRIA Orthopaedic & Sports Medicine Conference in Bloomington, MN. Her keynote, "Does Sex Really Sell Women's Sports: The View from Elite Female Athletes," discussed Kane and colleagues' research on media representations of female athletes from the athlete's perspective, in particular. The data indicate that the vast majority of female athletes' prefer to be depicted on-court, in-uniform, and in action.

Daheia J. Barr-Anderson, Ph.D., Tucker Center affiliated scholar, associate professor in the School of Kinesiology and director of the Behavioral Physical Activity Laboratory (BPAL), co-published with colleagues in the December 2018 issue of the Journal of Racial and Ethnic Health Disparities. The article, "Positive Outliers Among African American Women and the Factors Associated with Long-Term Physical Activity Maintenance," studies the behaviors and personal characteristics of African American women who have achieved long-term physical activity success, and compares characteristics with those who do not maintain recommended levels of physical activity. The findings identify factors that may be important for successful physical activity maintenance among African American women and may help to inform the development of effective behavioral interventions to promote sustained, long-term physical activity engagement in this population.

LaVoi, and former TC graduate student Maya G. Hamilton, Ph.D., published in the Journal of Applied Sport Psychology. The article, "Coaches Who Care: Moral Exemplars in Collegiate Athletics," highlights collegiate coaches that have made a significant, positive impact on their athletes and their sport. 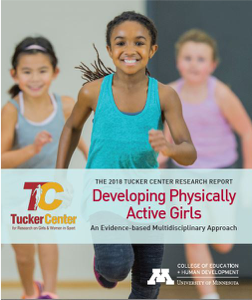 To celebrate our 25th anniversary, we released The 2018 Tucker Center Research Report, Developing Physically Active Girls: An Evidence-based Multidisciplinary Approach. This report connects research-based knowledge to strategies and practices which helps ensure that every girl has ample opportunity to fully engage in sport and physical activity. The overarching focus of the report examines two essential questions: 1) What does the research tell us about critical factors (e.g., societal, environmental, interpersonal, intrapersonal) that influence adolescent girls' physical activity in the United States; and 2) What are the outcomes (e.g., psychological, physical, social, emotional, moral) that participation in sports and physical activity have on adolescent girls?

The scope of our 2018 Report includes eleven chapters written by leading multidisciplinary scholars. Evidence-based chapters include psychological, sociological, and physiological dimensions of girls' physical activity participation, as well as chapters on sports medicine and the influence of mass media on girls' health and well-being. Because "girls" are not a singular, monolithic group, chapters focus on girls' intersectional identities and include invisible, erased, and underserved populations such as immigrant girls, girls of color, girls who identify as lesbian, transgender or queer, and girls with cognitive and physical impairments. The report contains the Ecological-Intersectional Systems Model of Physical Activity for Girls to guide thought and organize the vast literature about girls' physical activity participation, and ends with a Best Practices chapter and a Positive Model for Developing Physically Active Girls to guide program development, interventions, and research.

After 26 years as the founder and first director of the Tucker Center, this spring professor Mary Jo Kane, Ph.D., transitioned to her new role as the Center's director emerita, and Nicole M. LaVoi, Ph.D., who had been serving as co-director, became the sole director of the Tucker Center. Over the past 15 years, Drs. Kane and LaVoi have formed a remarkable partnership, working closely together to make the Tucker Center what it is today—our nation's premier interdisciplinary research center, one which examines how sport and physical activity impact the lives of girls and women, their families, and communities.

After 30 years at the U of M, Kane began a phased retirement last fall, and is working with LaVoi and long-time program associate, Jonathan Sweet, to ensure a smooth transition under new leadership. Housed in the School of Kinesiology at the University of Minnesota, the Tucker Center remains committed to its unique mission of making a difference in the lives of girls and women through groundbreaking research, education and community outreach.

—Beth Lewis, Professor and Director of the School of Kinesiology