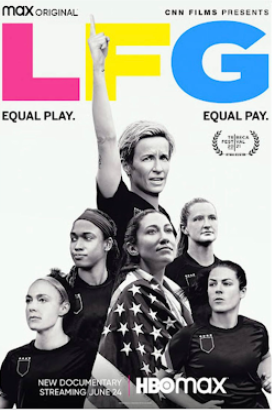 The Tucker Center for Research on Girls & Women in Sport, in partnership with CNN Films and HBO Max, presents a virtual screening of the film "LFG." "LFG" ("Let’s F*cking Go") is a gripping documentary feature centering on the United States women’s national soccer team’s public—and controversial—fight for equal pay.

The streamed screening is free and open to the public.

It is well documented that women's sport and female athletes are underrepresented in the sport media and in mainstream feature films. The Tucker Center Film Festival (TCFF), the first of its kind to highlight women in sport films, was established in 2011 and is presented in conjunction with the annual celebration of National Girls and Women in Sports Day. The purpose of the event is to celebrate and create awareness for films and documentaries related to girls and women in sport.

Consistent with our mission to provide outreach and programming for the community The TCFF is free, open to the public, and family friendly.

2019 Film Festival
Rise of the Wahine

2018 Film Festival
Battle of the Sexes

2016 Film Festival
In the Game