"Streetkids United 3 - The Road to Moscow" 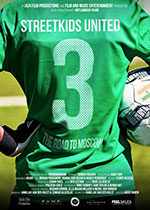 Streetkids United 3 - The Road to Moscow is the empowering story of 9 Indian girls who are chosen by Karunalaya Social Service Society to represent their country at the Street Child World Cup 2018 in Moscow, Russia. The girls who all had a rough start living on the streets, where they faced abuse and violence on a daily basis, are an inspiration to everyone who meets them because of their positive and uplifting spirit. They see the event as an opportunity to share to the world their plight. They hope to become a role model for other street children and show that street children are somebody.

The United Nations estimates there are up to 150 million children surviving on the streets worldwide. Life on the streets for these children is filled with danger. Instead of receiving support, they are often blamed for their situation and stigmatized. As a result, they face violence and abuse. Although they are vulnerable, they are also resourceful and resilient – but are denied the opportunities they need to realize their potential.

Streetkids United 3 - The Road To Moscow (Trailer) from JaJa Film Productions on Vimeo.

It is well documented that women's sport and female athletes are underrepresented in the sport media and in mainstream feature films. The Tucker Center Film Festival (TCFF), the first of its kind to highlight women in sport films, was established in 2011 and is presented in conjunction with the annual celebration of National Girls and Women in Sports Day. The purpose of the event is to celebrate and create awareness for films and documentaries related to girls and women in sport.

Consistent with our mission to provide outreach and programming for the community The TCFF is free, open to the public, and family friendly.

2019 Film Festival
Rise of the Wahine

2018 Film Festival
Battle of the Sexes

2016 Film Festival
In the Game